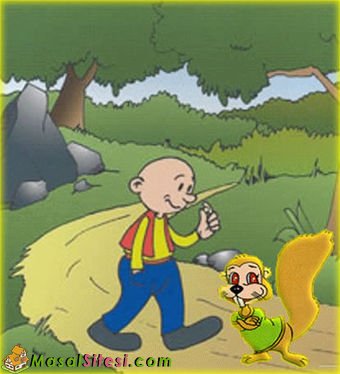 Once upon a time there was a woman and his bald son was living in a town, they were so miserable due to poverty. Some times they would not have anything to eat at home; therefore, Bald Boy took a basket to his hand and go wander at the forest. He’s got some mushrooms and brought them to her mother to cook. That day was another gloomy day and it was foggy and rainy. Bald Boy went to the forest again to collect some mushrooms and he ate some of them on his way. Later on, he sat under a big and old tree to rest. When he looked up above the branches he saw a squirrel that was just staring at him. When she saw the Bald Boy she got off from the branch that she was standing and started to cry. Bald Boy held it and tried to calm her down, kissed her, hugged her.

Squirrel said, “Aaah, Ahh. You are treating me very friendly and it has not I had for a long time”. And Bald Boy talked about his poverty to the squirrel. And the squirrel feels pity on him and she said:” I will do a favor to you.”
They walked for hours and hours and eventually at the end of the forest they saw the rock cliff. The squirrel said that: “Go over the rock cliff and grouses are going to the welcome you. They would be asking you three question to you and you can answer them you will find out what is going to be your reward.”

Everything that the squirrel said becomes true and grouses welcomed the Bald Boy, The queen of the grouses said that: “We are going to ask you three question and if you can answer them you are going to get two jar of gold as a reward.”

The queen showed to Bald Boy a cherry tree and said that; “tell me how many cherries on that tree.” Bald boy said “it is peace of cake as much as number of heather you’ve got. If you want to find out you can count

For the last question the queen hold to walnuts and asked tell me which one is the heavier? The one that sinks into the water said Bald Boy
As a result this answer is also taken correct and he has got two jar of gold.

He run to his house and gave the jars of treasures to his mother and went back to the forest to look for the squirrel and when he found it the squirrel was still crying. “I” said the squirrel, “I am the daughter of a Sultan but I was enchanted and I became a squirrel”
The Bald Boy wanted to help her but squirrel said “It is very difficult” You have to go to the Mountain of Kaf and you have to pass through a mountain that is guarded by a dragon and you will gather and fetch me the water of emerald.

Bald boy went to the town and bought a very sharp sword and went to mountain of Kaf. There were giant snakes guarding to front of the cave and Bald Boy was able to kill them by his sword. When the dragon heard the sounds of the snakes; he flied to around to see what was going on. Bald Boy took it as an advantage and got the emerald water put it in to a bottle.

He run back to the forest and found the squirrel. The squirrel was so happy to see that bald boy was accomplished the mission and as soon as she drunk to the water of emerald she becomes the prettiest girl on the earth. They went to the Sultan’s palace and when Sultan heard to the story he rewarded bald boy with millions of gold and treasuries. At the end, Bald Boy and his mother lived happily ever after.