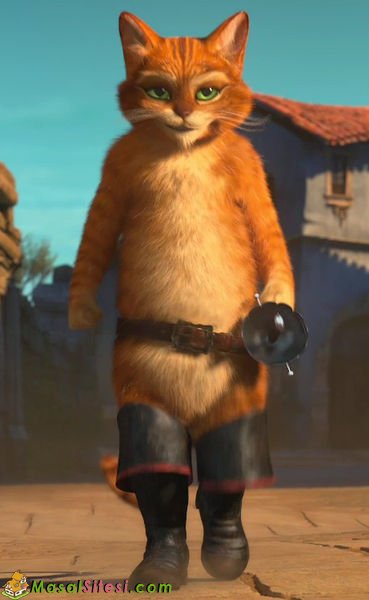 There was once an old miller who had three sons. When he died, he left them everything he had. Simon, the eldest son, inherited the flour mill, Alex got a donkey and Jack, the youngest, got a cat. Simon soon set to work grinding flour. Alex headed for town with his donkey. “I’m going to find work hauling things,” he said.

Jack, meanwhile, tried to think of a way to make a living. “That silly cat is worse than useless, for I shall have to feed him, as well as myself,” he grumbled. “Do not be so glum, Master,” the cat said. I have a plan that will make us both rich.” “What can you do? You’re only a cat!” said Jack.
“Give me a fine hat, a pair of good boots, and a large sack,” said the cat. “I shall take care of the rest.”

“Why not,” Jack said miserably. “What have I got to lose?” When the cat was dressed to his satisfaction, he left Jack sitting in a field, and headed for the nearest stream. Puss ‘n Boots, as he was then called, crouched on the bank and used his swift paws to pull a dozen gleaming fish out of the water.

His sack bulging with fish, Puss ‘n Boots strutted to the castle and asked to see the King. “What business does a cat have with the King?” asked the gatekeeper. “I have a gift from the Marquis of Carabas,” said Puss. He was allowed in at once, and bowed before the King, the Queen and their daughter, Cecile.

“The Marquis of Carabas sends his greetings, and would like you to have these fine fish from his estate, Your Highness,” said the cat.
“Tell the Marquis we appreciate his kindness,” said the King. But as soon as Puss had left, the King whispered to his wife, “Who is this Marquis?”masalsitesi.com
“I don’t know,” replied the Queen. “I’ve never even heard of him.”

Over the next few days, Puss returned to the court several times, each time with a gift for the royal family. “Here comes that cat again! Who is this Marquis of Carabas?” the courtiers whispered. Since no one knew who he was, everyone in the King’s court made up stories about him.

“I hear he is the richest man in the kingdom,” someone said. “And the most handsome,” said another. Then one day, when Puss brought the Queen a pheasant, she said to him, “Your master seems to be a good hunter.”

“Oh yes,” Puss replied. “The Marquis has many talents.”
“But why have we never met him?” asked the Queen. “You must arrange a meeting.” That night, Puss told Jack he was to meet the Queen. “That’s ridiculous!” said Jack. “Look at me! I don’t even have a decent shirt!”
“Don’t you worry,” said Puss. “Leave everything to me.”
The next day, Puss led Jack to the river.
“Take off your shirt and get in the water,” Puss told him.
“But I can’t swim!” said Jack.
“Don’t worry. Just do as I say,” said the cat.
But when Jack stepped into the river, the cat pushed him into deep water. Just as Puss had planned, the current carried

Jack downstream to the bridge where the king’s carriage was passing.
“Help!” cried Jack.
“Hurry!” yelled Puss. “The Marquis of Carabas is drowning!”
The king ordered two men to pull Jack out of the water. He sent a third man to the castle for dry clothing. Soon, Jack was dressed in clothes fit for a marquis.
“He would make a handsome husband, don’t you think?” whispered the Queen to Cecile.
“You must be exhausted from your ordeal,” the King said to Jack. “We shall escort you home.”
“Yes. Where exactly is your castle?” asked the King’s advisor, who was suspicious of Jack and his cat.
“Well, ahhh, I don’t have a castle,” muttered Jack.
“The Marquis is always so modest. There it is,” said Puss, pointing to a castle on the hill.
“Now, if you will excuse me, I have some errands to run.” And the cat leapt out of the carriage.
Puss ‘n Boots raced along the road, ahead of the King’s carriage, and shouted to the peasants working in the fields.
“If anyone asks, say these lands belong to the Marquis of Carabas,” Puss instructed them.
“The castle, too.”
“Certainly, Sire,” the peasants replied.
Puss reached the castle on the hill, and knocked at the huge gate. A door in the gate swung silently open.
Puss tiptoed through the dark rooms. Suddenly, a giant ogre appeared before him.
“What are you doing in my castle?” he hollered.
Puss introduced himself politely.
“I hear you have great magical powers and that you can transform yourself into an elephant, or even a lion,” said Puss. “Is that true?”
Instantly, the ogre transformed himself into a lion.
“What do you think?” he roared, chasing Puss around the room.
“I believe you!” said Puss. “But can you make yourself as small as a mouse?” can do anything,” replied the proud ogre. But as soon as he transformed himself into a mouse, the clever cat swooped him up and swallowed him whole. Meanwhile, the King’s carriage approached the castle.
“Who owns all these rich fields?” he asked.
“The Marquis of Carabas,” replied one of the peasants.
“And the castle is his, too?” asked the King.
“Yes, Sire,” said the peasant.
With the ogre out of the way, Puss ran through the castle, opening all the gloomy curtains to let the sun in. He reached the gate just as the King’s carriage pulled up.
“Welcome to the estate of the Marquis of Carabas,” Puss announced, bowing low.
“Why it’s lovely,” said the Queen.
“You’ve done very well for yourself, young man,” said the King.
“Yes, it seems that I have,” replied Jack.
But Jack was not looking at the castle at all – from the moment he met her, Jack only had eyes for Princess Cecile.
Several months later, Jack and Cecile were married, and they lived happily ever after. Of course, Puss ‘n Boots lived happily ever after at their side.