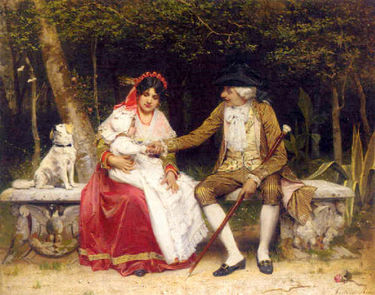 Really, the largest green leaf in this country is a dockleaf; if one holds it before one, it is like a whole apron, and if one holds it over one’s head in rainy weather, it is almost as good as an umbrella, for it is so immensely large. The burdock never grows alone, but where there grows one there always grow several: it is a great delight, and all this delightfulness is snails’ food. The great white snails which persons of quality in former times made fricassees of, ate, and said, “Hem, hem! how delicious!” for they thought it tasted so delicate–lived on dockleaves, and therefore burdock seeds were sown.

Now, there was an old manor-house, where they no longer ate snails, they were quite extinct; but the burdocks were not extinct, they grew and grew all over the walks and all the beds; they could not get the mastery over them–it was a whole forest of burdocks. Here and there stood an apple and a plum-tree, or else one never would have thought that it was a garden; all was burdocks, and there lived the two last

They themselves knew not how old they were, but they could remember very well that there had been many more; that they were of a family from foreign lands, and that for them and theirs the whole forest was planted. They had never been outside it, but they knew that there was still something more in the world, which was called the manor-house, and that there they were boiled, and then they became black, and were then placed on a silver dish; but what happened further they knew not; or, in fact, what it was to be boiled, and to lie on a silver dish, they could not possibly imagine; but it was said to be delightful, and particularly genteel. Neither the chafers, the toads, nor the earth-worms, whom they asked about it could give them any information–none of them had been boiled or laid on a silver dish.

The old white snails were the first persons of distinction in the world, that they knew; the forest was planted for their sake, and the manor-house was there that they might be boiled and laid on a silver dish.