The Lion And The Mouse English Story 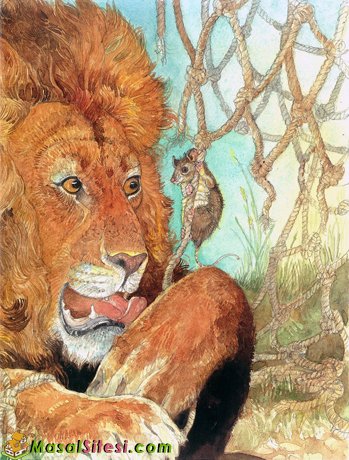 One day a Lion lay asleep in the jungle. A tiny Mouse, running about in the grass and not noticing where he was going, ran over the Lion’s head and down his nose.

The Lion awoke with a loud roar, and down came his paw over the little Mouse. The great beast was about to open his huge jaws to swallow the tiny creature when “Pardon me, O King, I beg of you,” cried the frightened Mouse. “If you will only forgive me this time, I shall never forget your kindness. I meant no harm and I certainly didn’t want to disturb Your Majesty. If you will spare my life, perhaps I may be able to do you a good turn, too.”

The Lion began to laugh, and he laughed and laughed. “How could a tiny creature like you ever do anything to help me? And he shook with laughter.

“Oh well,” he shrugged, looking down at the frightened Mouse, “you’re not so much of a meal anyway.” He took his paw off the poor little prisoner and the Mouse quickly scampered away.

Some time after this, some hunters, trying to capture the Lion alive so they could carry him to their king, set up rope nets in the jungle. The Lion, who was hunting

for some food, fell into the trap. Her roared and thrashed about trying to free himself but with every move he made, the ropes bound him tighter.

The unhappy Lion feared he could never escape, and her roared pitifully. His thunderous bellows echoed through the jungle.The tiny Mouse, scurrying about far away, heard the Lion’s roars. “That may be there very Lion who once freed me,” he said, remembering his promise. And he ran to see whether he could help.

Discovering the sad state the Lion was in, the Mouse said to him, “Stop, stop! You must not roar. If you make so much noise, the hunters will come and capture you . I’ll get you out of this trap.”

With his sharp little teeth the Mouse gnawed at the ropes until they broke. When the Lion had stepped out of the net and was free once more, the Mouse said, “Now, was I not right?”
“Thank you, good Mouse,” said the Lion gently. “You did help me even though I am big and you are so little. I see now that kindness is always worth while.”

Moral of the story: Even the strong sometimes need the friendship of the weak.