The Hare and the Tortoise English Story 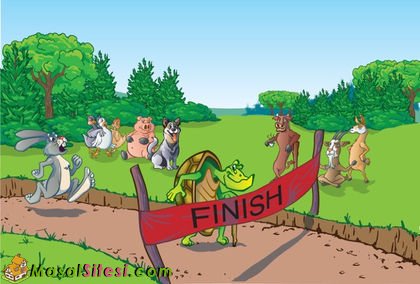 Once there was a Hare who used to laugh scornfully at a Tortoise because he plodded along so slowly. “You never can get anywhere with those short legs of yours. Look at my long legs! They’re so swift no one would dare race me.”

All the animals of field and forest were tired of hearing the Hare brag. At last the Tortoise said, “If we were to run a race, I’m sure I would beat you.”

The animals were astonished for they knew the Tortoise was the slowest of them all, and the Hare, bursting into loud laughter, cried, “What a joke! That slowpoke thinks he can beat me! Come on, Mr. Tortoise, you shall see what my feet are made of. Why I can beat you before you are even half-started!”

“You’d better not be too sure,” cautioned the Tortoise

All the big and little animals gathered to watch the race. At the signal the Hare leaped forward in a great bound and soon left the plodding Tortoise far behind him on the dusty road. Looking back, the

Hare could not even see the Tortoise after a little while.

“Hum-m, I’ve as good as won this race already,” the thought, “There’s really no reason to hurry.” So, as the sun was very warm, he decided to rest a bit under a shady tree. masalsitesi.com “I’ll come in away ahead of that Tortoise, anyhow,” he told himself.

Soon he was sound asleep. the little rest streched into a good long nap.

Meantime, the Tortoise jogged steadily along on the hot, dusty road, ever so slowly, but surely, and soon he passed the Hare who was still peacefully sleeping.

Quietly the Tortoise plodded on nearing the goal. When the Hare finally woke up with a start, he saw the Tortoise just reaching the finish line far ahead and he could hear all the animals cheering the winner.

Boastful and careless, the Hare had lost the race. Now he would never again be able to count on his speed.
Moral of the story: Perseverance wins the race